Bringing cultures together at Centennial Theatre 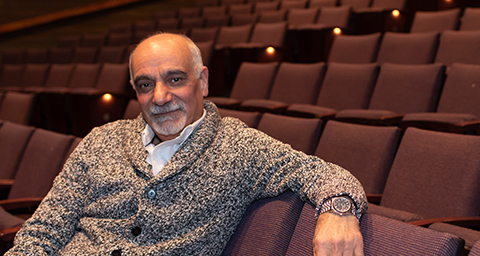 Ali Motallebi loves his North Shore community. Originally from Iran, he has built a successful business and raised a family here. He says, “Here, I’ve experienced the best quality of life for me and my family.”

Community in a store
Twenty-three years ago, Ali bought a grocery store on Lonsdale Avenue that specialized in international foods. It quickly became a gathering place for the Persian community on the North Shore who were nostalgic for tastes from their homeland. Ali would also help them find services in the community and ways to connect to others.

Over the years, Ali has watched his clientele grow increasingly diverse. Ali estimates that over 40% of his customers are non-Persian today, a fact he’s proud of. He enjoys the cultural diversity he encounters in his store and on his daily walks on the seawall. “That’s why I love the North Shore.”

Ali can’t imagine his community without Centennial Theatre. He knows how much it means for people to be able to enjoy live music and cultural events at a reasonable cost. He says, “Centennial will always be my home.”

Continuing to build community
With Ali’s help, Persian music, arts and culture are alive and well in our community. Increasingly, the shows are being attended by people from many cultural backgrounds - a triumph for cultural diversity in our community.

Ali says, “I hope we can keep making our community a better place – we all have to work on it together.” The NVRC couldn’t agree more!