Upon entering the venue, guests ages 12+ must present proof of vaccination. For guests 18+, identification must also be provided.

For the safety and comfort of all, patrons are required to wear a mask in all indoor public spaces.

We recommend arriving early as the vaccination verification process may take extra time. 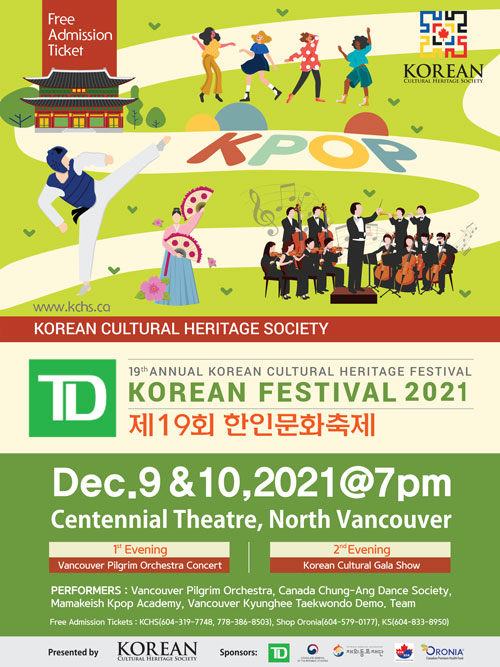 The Korean Cultural Heritage Society presents an evening with the Vancouver Pilgrim Orchestra performing Antonin Dvorak’s Cello Concerto in B minor with soloist Luke Kim – one of Canada’s most dynamic and versatile cellists.

Commemorating Korean culture and heritage, the Vancouver Pilgrim Orchestra, conducted by Maestro PW Suk will perform an array of Korean Folk Songs along with classical symphonic masterpieces: Elgar’s Pomp and Circumstances and Rossini’s La gazza ladra. Join us for this monumental night of culture, symphonic music and excitement.

Mamakeish Company, directed by Keisha Jiwon Kang, is a top Vancouver based K-pop dance performing group promoting and educating the K-pop dance genre locally and globally. They will be performing two of the most famous K-pop groups: BLACKPINK and BTS.

Canada Chung-Ang Dance Society led by YoungJoo Kim works to express the joy and share the distinctive flavor of Korean arts and culture. In this Gala show, they will bring their unique blend of tradition and creative performance through fan dance, hand-drum dance, and two brand new pieces.

KyungHee Taekwondo Demo Team has been demonstrating in many different events for more than 80 times around Greater Vancouver. Recently, the team won 2015, 2016, 2017, 2018, and 2019 Pan American Taekwondo Championships in the U.S.