An Evening with Ellie Greenwood, Dylan Bowman and Gary Robbins

10 people will be randomly drawn from all ticket buyers in the first two weeks for an opportunity to join Ellie, Dylan and Gary on a private trail run in North Van followed by breakfast on Saturday morning, November 23rd.

Buy Tickets
Tickets are a final sale. No refunds or exchanges.
If you require accessible seating, please contact the box office directly at 604-984-4484.
Presented by:
Gary Robbins 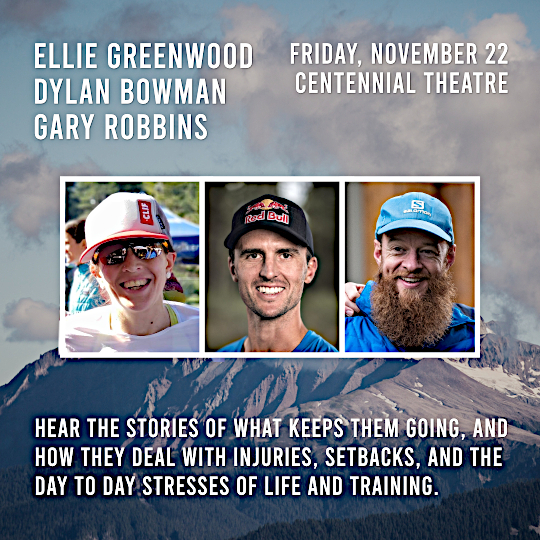 Dylan Bowman is one of the top athletes in the sport of ultrarunning now, and he also just happens to be a very genuine and thoughtful person.

His list of accomplishments speaks for itself, and in the last two years alone he has won UTMF (Japan) and the Tarawera 100k (New Zealand), while placing 2nd at TDS and 7th at UTMB (France). His resume is littered with top results at races around the world, from the 50k distance on up through the 100 mile distance. Few know more about how to train, race and succeed at any distance, in any environment, than this guy. Dylan Bowman

Ellie Greenwood is a British ultramarathon runner. She began her ultra career in 2008 and is a two-time 100km World Champion, winning the title in 2010 and 2014. She holds numerous course records, including those for the Western States 100, the Canadian Death Race, the JFK 50 Mile Run and the Knee Knackering North Shore Trail Run. She is the first British woman to win the 90 km Comrades Marathon in South Africa. Greenwood was born in Dundee, Scotland, raised in England and is now based in Vancouver. Ellie Greenwood