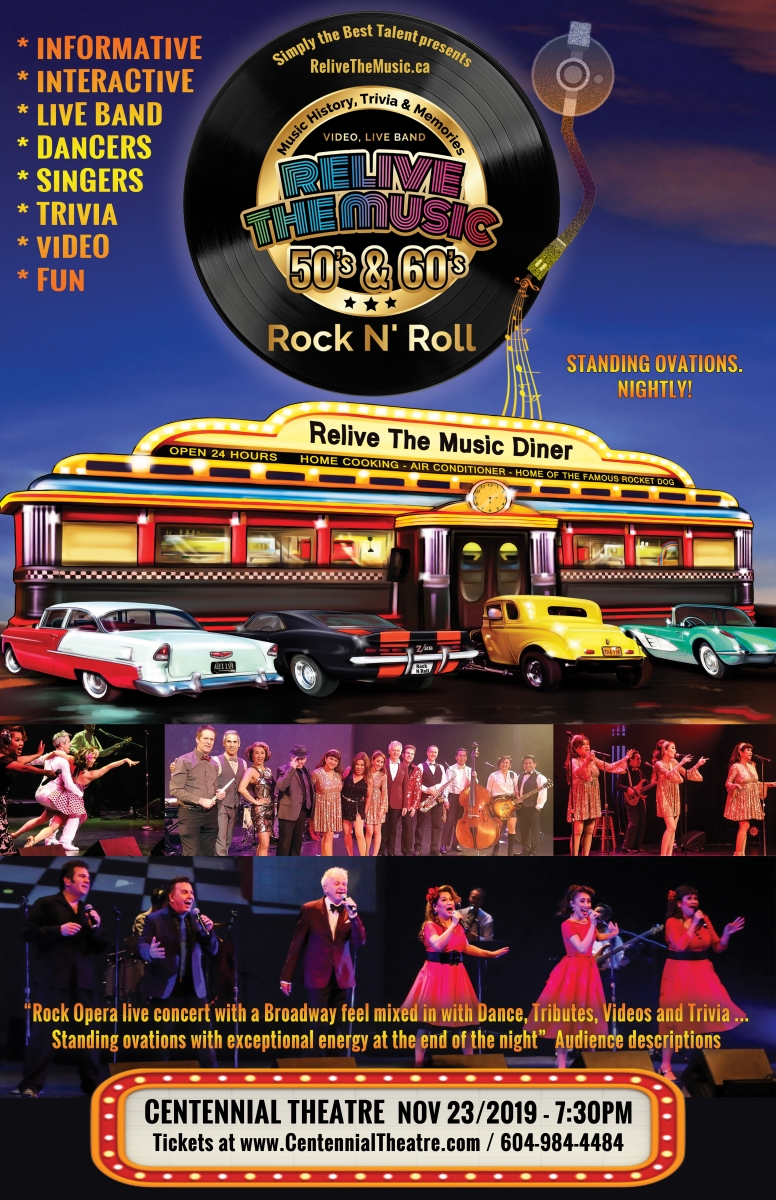 A brand new one of a kind show that takes the audience through chronological Music History, Trivia & Memories of the 50’s & 60’s. Learn things you never knew about these artists! You will see an energetic live band, amazing front singers and dancers transforming and re-creating two decades of music, costumes, trends and dancing with video imagery in the background.

The audience will see silhouettes of a band onstage, video will roll in the background with singers narrating trivia about the upcoming artists prior to each song without mentioning the names.  There will be a pause. The audience is encouraged to shout out their guess of what song is coming up. The song starts, the crowd cheers with “oohs” and “ahhs” as some got it right and some got it wrong and others go “Wow, I didn’t know that”.  A very interactive show. Be ready to go onstage to join the dancers at times.

We sorted through 20 years of over a thousand songs into one – 100 minute show. The main criteria was to trim it to hit songs that are still relevant and memorable to this day. We made our pick of songs that we feel will never get old.

The cast of Relive the Music features World Champion Luisa Marshall as seen on Oprah and ELLEN ( but performing as herself not Tina Turner) and 4 to 5 more carefully chosen male and female frontline singers that perform throughout the show.  Although, the show isn’t designed to be a tribute show as such, there may be special Tribute guests appearing at times and the cast will be making costume changes during the show to convey the look and feel of artists in each era.  The Luisa Marshall Show band will be performing throughout. It’s all about the great music, dance and trivia of that era. There will be some professional dancers performing during the show.

The grandparents and great grandparents of today that grew up in this era should bring along their children, grandchildren and great grandchildren to see how cool they really were back then, how great the music and dance moves were and not to forget the fantastic cars back then. You will have to explain to these younguns a few things like what a 45 record is, A side, B side, and that there was no such thing as a cell phone. Tell them why you hung around a place called “The Diner”.  Did we mention the fantastic cars of that time? Yes back to cars. What car do you wish you still have today?

The audience is encouraged to come dressed in the 50’s or 60’s outfit they most loved.