The connection between physical activity & brain health in adults

“Even doing a single bout of physical activity can boost your mood & directly improve your cognitive function.”

Dementia. Alzheimer’s. Brain health. All hot topics of discussion in academic circles of late, but what about the rest of us? With the number of Canadians living with dementia expected to rise sharply over the next decade, we felt it was an opportunity  to talk about the impactful role physical activity can play in helping combat the onset of both debilitating brain disorders. And timely given that January is Alzheimer’s Awareness Month.

However, instead of inundating you with a lengthy list of stats or endless scrolls of infographics, we decided to go right to the source to help shine a light on the importance of living an active lifestyle when it comes to promoting brain health. Enter Dr. Jeremy Walsh (Post-Doctoral Research Fellow in the Exercise Metabolism and Inflammation Laboratory at the University of British Columbia-Okanagan). Through his research and many years studying the brain, Dr. Walsh knows better than most the positive impact physical activity can have on cognitive function.

“Physical activity can improve the brain in a number of ways,” Dr. Walsh explained. “One of the ways is indirectly, as physical activity reduces the risk of certain diseases, like cardiovascular or metabolic diseases, including high blood pressure, diabetes and obesity. And we know that these conditions increase our risk of neurological diseases like dementia and Alzheimer’s as we get older.” 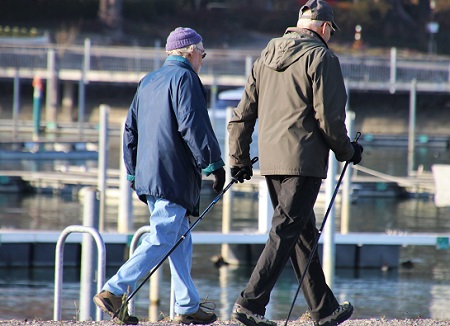 As highlighted  in the ParticipACTION 2019 Report Card on Physical Activity for Adults, the connection between a healthy brain and physical activity is strong, and that connection becomes even more important as we age. Scientists and doctors have been analyzing the link for years, and now it’s time for everyone to be aware and to start reaping the brain benefits that come along with living an active lifestyle.

“It’s never too late to start. When it comes to being active, you’ll begin to feel the benefits almost immediately,” Dr. Walsh said. “So, I think it’s important to remember that just getting active will lead to a tangible benefit, regardless of your previous experience.”

Unfortunately, one major hurdle many Canadians need to clear when it comes to dealing with dementia and Alzheimer’s and understanding their signs and impacts is distinguishing the difference between the two.

“Dementia is a clinical syndrome – not actually a disease. Dementia the term used to describe a group of symptoms that affect cognitive function,” said Dr. Walsh. “This includes changes in our memory, in our reasoning, in our problem-solving skills our verbal abilities, and importantly our ability to complete daily tasks.”

More specifically, more than half a million Canadians currently live with Alzheimer’s disease, and with that number expected to rise by 66 per cent over the next decade to more than 900,00 diagnosed Canadians, it’s time to get active and make physical activity a key part of your daily routine. Because, as Dr. Walsh points out, physical activity is an important way to ensure both you and your brain stay as healthy as possible.

“We know physical activity is beneficial for most aspects of our health, so if we can shift the framing and motivation toward something we can feel immediately, I think that might be an effective way of getting people to get active for their own reasons,” said Dr. Walsh. “Despite the intuitive understanding that the physical activity benefits the brain, I think that more emphasis should be placed on the connection between physical activity and the brain. Especially when we consider that being physically active can grow, strengthen, and protect the brain.”

So, whether it be taking a couple brisk walks every day, riding your bike to work a few times a week or joining a pick-up league at your local rec centre, make sure you are giving your brain every chance to be as strong and healthy as it can possibly be.