How to ‘spring clean’ inactive routines with physical activity

This post was written by ParticipACTION Apr 07, 2021 in General, Health & Wellness, Mental Health

Give yourself some credit, everyone, we made it through another tough Canadian winter - tough for more than a few reasons.

While some parts of our great nation are still dealing with less-than-ideal forecasts for the next couple weeks (we're looking at you, Eureka, NU, where it was minus-33 degrees last week), spring is officially here for the rest of us. That’s right. Those ‘it’s too cold outside to get active’ 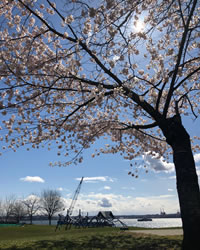 Sure, it might be trickier to get out and about these days than we're used to, but spring is here and summer is just around the corner, so it’s the perfect time of year to set some healthy active habits for once things finally get back to normal.

It’s not always easy to get, and stay, motivated to be physically active when you're stuck inside. But we’re through the thick of it now in terms of nasty weather, so it’s time to start planning ahead and get moving.

Clean-up a lot more than just your home

The time has come to ‘spring clean’ your inactive routines and be as active as you possibly can. Regardless of what's happening in the world right now, it's important that both adults and children work toward hitting national guidelines for physical activity in order to stay happy and healthy - even if that means only moving a little bit each day.

You still probably want to tackle that massive pile of leaves that’s been around since Halloween, declutter your bedroom closet, or deal with those clogged gutters you’ve been avoiding, but your spring cleaning shouldn’t end there. Check out the following ways you can swap the inactive routines you developed over winter for fresh, active ones:

While it is important to be physically active every day, all Canadians should follow their respective public health authority recommendations. The above is considered, to the best of ParticipACTION’s knowledge at the time of publication, to align with Canadian public health recommendations. Changes in circumstances after the time of publication may impact the accuracy of the information.

Posted with permission from ParticipACTION. Read more of their blogs here.