One of North Vancouver’s most popular hikes is once again fully open, after being partially closed due to a massive rock-slide in the Seymour River canyon in 2014. A new suspension bridge over the river was built during the summer/fall of 2018—re-connecting the east and west arms of Fisherman’s Trail which starts at the end of Riverside Drive and ends 8 kilometres north.

Each kilometre of the rainforest trail has its own spectacular views, history lessons, and wonderful serenity. Families can decide how far they want to venture along the trail, but the new bridge promises to become an attraction for locals and tourists alike. 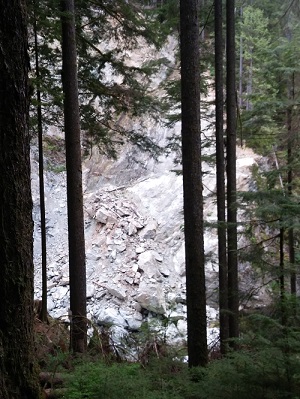 December 2014 Rockslide
In the early morning hours of December 7, 2014, a massive chunk of the west bank of the Seymour River Canyon broke away, sending boulders and trees crashing over 80 metres down to the river below. An estimated 50,000 square metres of rock was dislodged, effectively damming the river and creating dangerous flooding upstream--overflowing a concrete bridge that was eventually removed completely--cutting off a key link for recreational trails in the Lower Seymour Conservation Reserve (LSCR). 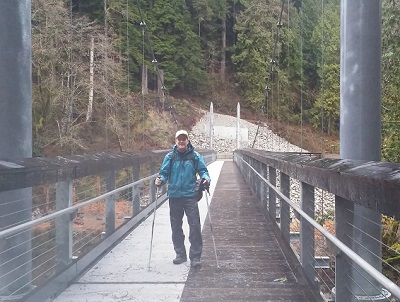 Seymour Suspension Bridge
After lengthy consultations with the public and conservation authorities, a decision was made to construct a raised suspension bridge to replace the concrete bridge. The $2 million Seymour Suspension Bridge—73 metres long and 2.5 metres wide—was constructed for hikers, cyclists and equestrians. It is 25-to-30 metres above the river (depending on water levels) to avoid any potential flood risk created by the rock-slide. The bridge deck is covered with a combination of rough-cut cedar, and non-slip metal mesh.

The project also includes re-establishing trail connections with the “Bottle Top” mountain bike trail on the east side of the river (which has been closed for 4 years), and the Twin Bridges Trail on the west side—all welcome news for hikers and mountain bikers wanting to explore both sides. 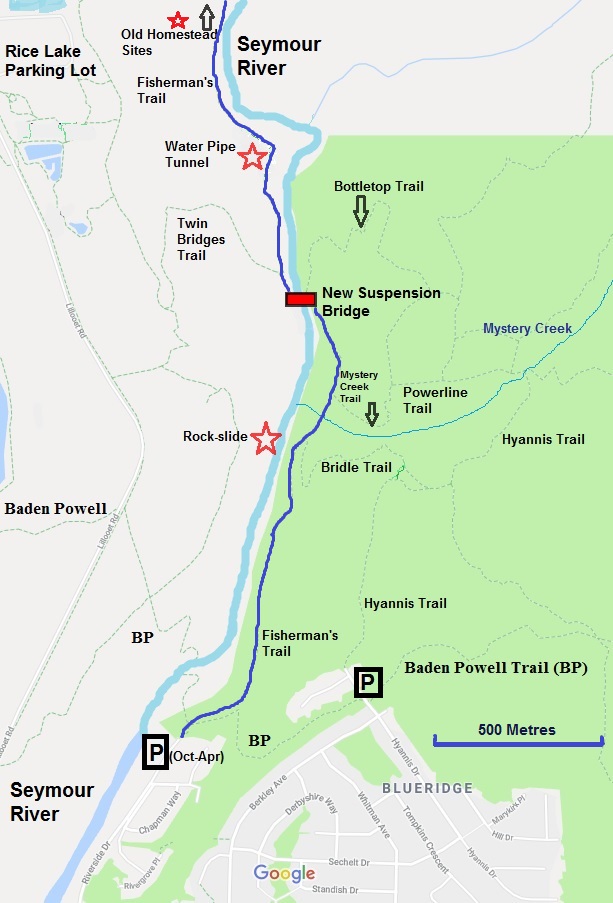 Fisherman’s Trail History
The Fisherman’s Trail is actually an old logging road running parallel to the Seymour River (commercial logging in the LSCR finally ended in 1994). Signs of the former logging trade (cedar stumps) are easily visible in the forest. The trail is wide and gentle, and the first kilometre has occasional views down into the river-canyon on the left, with moss and fern-covered rock-faces to the right.

See the Rock-Slide
After 10-15 minutes you’ll notice extra safety-fencing along the canyon wall, as you approach the rock-slide viewpoint near the junction with Bridle Trail. Stop here for some photos, and prepare to be awed by the sheer magnitude of the boulders (some as big as homes) and huge trees that plummeted to the river. Crews have been working each summer/fall (after water levels drop) to blast some of the rocks to open up the river, but the aptly-named “House Rock” remains. Continuing north on Fisherman’s Trail towards the bridge, keep looking left into the forest to see the impact of the flooding—hundreds of dead or dying trees.

History Lessons
The suspension bridge is the fourth structure to cross the Seymour River in this spot. The original bridge (1908-1992) carried a water main and pedestrians. A second steel bridge (hence the reference to “Twin Bridges”) was built in 1926 for the logging road, and lasted until 2009, when it was replaced by a concrete bridge with blue railings. A small piece of rusted steel girder from one of the “twins” is on display on the west side of the river.

After crossing the river, the Fisherman’s Trail continues north to another history lesson—the entrance of a short tunnel which was blasted out of a rock wall for an old water pipeline. If you have a flashlight, you can try walking/crawling carefully through the tunnel, but most people (including me) are satisfied to just look inside.

Less than a kilometre north of the tunnel is a pair of moss-covered wooden supports, which mark the entrances to former homesteads dating back to the early 1900s.  Some artifacts, plus remains of foundations and a chimney are still barely visible.

Access Options
The most direct trailhead for Fisherman’s is at the north end of Riverside Drive.  However, non-residents are not permitted to park on Riverside Drive near the trailhead from May to September, so during the summer you can park at another access point on Hyannis Drive (accessed via Berkley Avenue—see map). Hyannis Drive is also reachable via transit (214 bus). From Hyannis take the Baden Powell Trail west and downhill along a creek until you turn right (north) at the junction with Fisherman’s Trail.

You can also access the area via Twin Bridges Trail starting at the Rice Lake parking lot at the end of Lillooet Road. 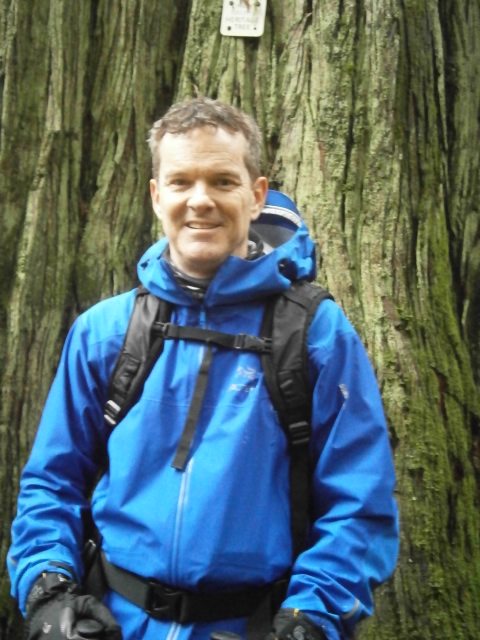 Mike Hanafin is an avid hiker and snowshoer with a passion for old-growth trees, and discovering hidden gems in the North Shore forests.