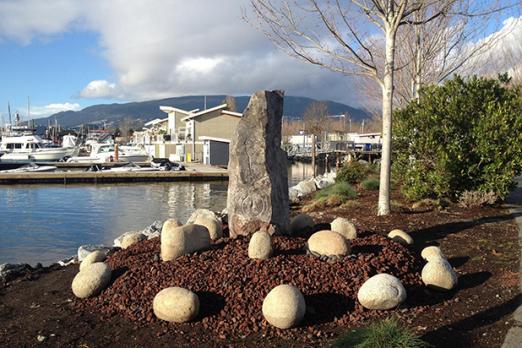 The idea of transformation into stone is quite literally an ancient idea on the North Shore. Local First Nations history talks about creatures and humans being turned into stone so that future generations could learn from the important moment in time when they were transformed. Carved stones or erected stone monuments can be found everywhere from ancient Persia, Korea, Africa, the Americas and Europe.

For this community art project, artist Aaron Nelson-Moody organized stone carving demonstrations inviting the community to try carving or to create a petroglyph-like image that the artist could engrave onto the column. The uniting of images from diverse cultures symbolically reflects the commonality of human history in art making and story telling.  The mandala garden found at the base of the stone was created by artist Prav Pillay. The garden is symbolic of the temporal state while the basalt column speaks to the eternal.

About the artist:
Aaron Nelson-Moody lives and works in the Capilano Village on the North Shore of Vancouver, British Columbia. While Aaron is his English name, he also has his Squamish Nation name, Tawx’sin Yexwulla, which translates as: Splashing Eagle. He also carries the name, Poolxtun, from his adopted father Gerry Oleman, which he tanslates as, ‘the spreading ripples from a splash of water’. He has worked with community groups and students in a number of schools in the Squamish and Vancouver areas since 1995, as well as sharing in Japan and Scotland.