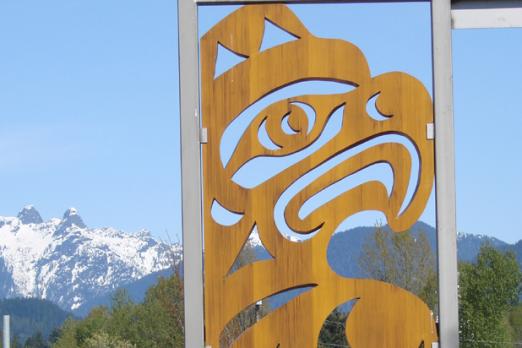 This contemporary stainless steel and red cedar sculpture represents the concept of entering traditional territory as one enters Mosquito Creek Marina / Squamish Nation land from the North Vancouver waterfront. The artistic design concept behind the piece is the historical architecture of the Coast Salish people. The philosophical context of the sculpture is about returning to ancient wisdom and ancient knowledge that has been lost in our recent industrial era.

The “Big House” where the Chief and extended family members lived always had houseposts in front of the entrance doors. The Coast Salish culture is visual and oral. Stories were shared orally and by artistic carvings symbolizing various family milestones carved into cedar houseposts and other markers.There are many legends about the Thunderbird and Sun amongst the Northwest Coast people. The two Thunderbirds on either side of the gateway also mirror the twin peaks of the North Shore Mountains – or the Twin Sisters. Thunderbird is considered the most powerful of all the mythical creatures, and can fly to the sun and back, bringing ancient knowledge from the Creator. The two Thunderbirds represent a male and female chief; a balance of leadership.

About the artist:
Wade Stephen Baker was born in Vancouver in 1956. His Kwakiutl native name is Mintle-e-da-us which means place of plenty. His mother is high ranking nobility of the Kingcome Inlet people, Kwakiutl Nation in British Columbia. His late father, descended from Chief Capilano, was Coast Salish, Squamish Nation. A self taught artist, Wade was inspired at an early age by watching his relatives, master carvers Mungo Martin and Henry Hunt. He currently lives in North Vancouver.