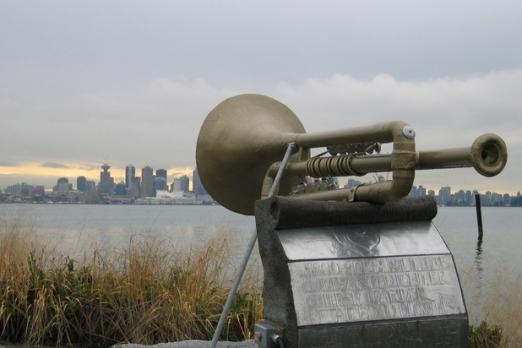 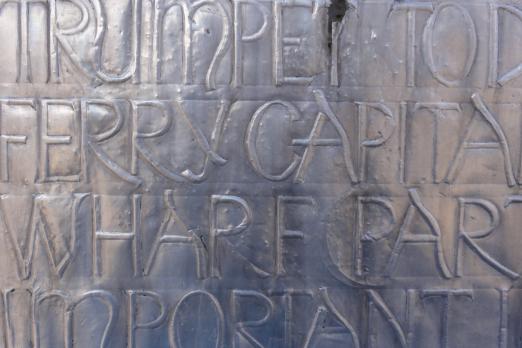 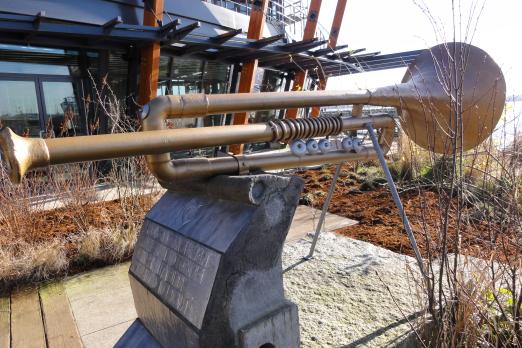 This commissioned sculpture was originally part of the rejuvenation plan for Lower Lonsdale area.  It was a companion piece to the artwork North Shore Rhapsody,  that envisioned the history of North Vancouver expressed in musical form.   However due to weather damage the large of the two works was moved indoors.

Joe Bustemente Trumpet  was eventually moved as well, from its orginal location at Rodgers Plaza, to the Pier Waterfront, a location where  Mr. Bustemente may have often stood.  He was a one armed Chilean mariner, retained  in the early 1900's by the local ferry company to blow his trumpet to direct the ship captains to the North Vancouver wharf at night or when it was foggy.   The sculpture has been fitted with a sound component that plays snippets of trumpet music that would have been popular at that time.

Sculptor Ryszard Wojciechowski (1939-2003) was born in Poland. He studied art and received his degree with distinction from the Academy of Fine Arts in Warsaw in 1964.  Shortly thereafter, he accepted a teaching position at the academy and began a lifelong career devoted to sculpture.  In response to unrest in Poland, he eventually moved to Italy and then to Canada in 1990.  Today his works can be found Poland, Italy and Canada.  To find out more about the artist visit his website at www.ryszardwojciechowski.com 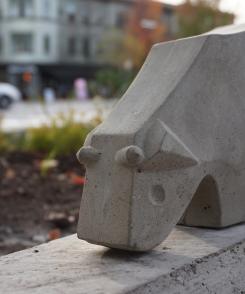